A Victorian Picnic and Not Knowing What Happened 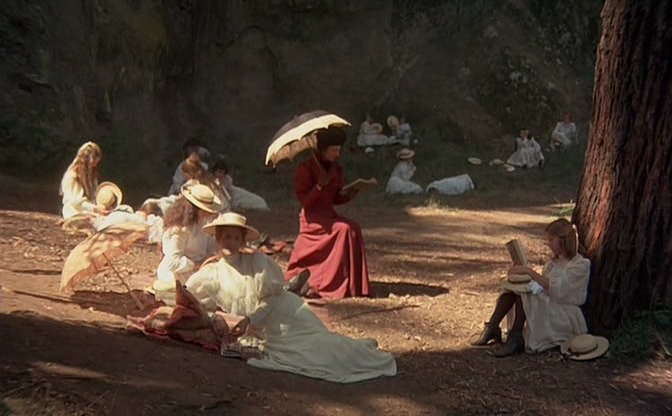 The proper way to picnic. Image: The Cinephiliac

Some movie scripts try to answer all questions related to the plot, even if the explanations are rather far-fetched.

But the Australian film, Picnic at Hanging Rock (1975), doesn’t bother with any of that. Nay, this film raises tantalizing questions and leaves them unresolved.

In fact, unanswered questions is the Point.

The story is set during the Victorian era, at the turn of the last century. Students at a prestigious girls’ college prepare for a Valentine’s Day picnic at Hanging Rock, a remote and imposing monolith made of volcanic rock.

The girls, chaperoned by two of their teachers, have a lovely time at the picnic; they read, nap, and play with each other’s hair. Their crisp, white dresses look incongruous given the landscape, but that’s the Victorians for you.

Four of the students decide to disobey The No-Exploring Rule to further investigate the ancient rocks. As they hike into the rock formations, three of the girls become almost hypnotized, as though something is Summoning them.

The fourth girl, however, doesn’t get it. She’s tired and couldn’t care less about these stupid rocks.

After a short repose, the three spellbound girls simultaneously remove their shoes and stockings to climb even higher, as though they’re participating in a ritual known only to themselves. The fourth girl is left behind and suddenly sees? hears? feels? something that terrifies her.

When the party returns to the college, we learn the disastrous outcome of the picnic: Three girls have vanished, along with one of the teachers.

As events unfurl – police investigate, parents panic –  we realize none of the people in this story are as important as the two principle characters, namely: (1) The atmospherics; and (2) The question, “What happened?”.

Director Peter Weir uses soft, muted tones – much like a Victorian watercolour – which, curiously, make the story both remote and intimate. Although the pace of the film is unhurried, we can’t look away. We’re enveloped in ethereal mystery.

Alas, the film doesn’t tell us What Happened. We can speculate about the fate of the girls, but the movie refuses to give us certainty.

While it can be irksome not to have Answers, we quickly realize there are bigger issues the film is probing, namely the aftermath of a strange and disturbing event. How does it affect those who remain?

In short, how do we wrestle with something beyond our comprehension? 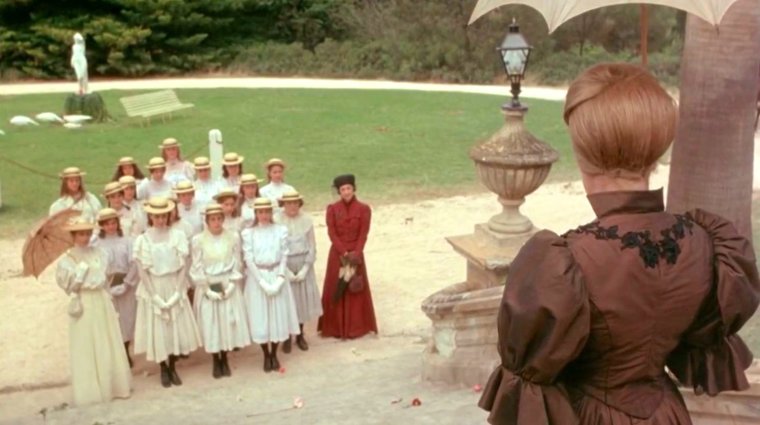 The headmistress has rules for Picnic Behaviour. Image: The Cinessential

Picnic at Hanging Rock feels like it’s based on an historical event, but it’s adapted from a popular novel by Australian novelist and playwright Joan Lindsay.

Lindsay herself addressed the novel’s ambiguity in a 1974 interview. “[I]t was written as a mystery and it remains a mystery,” she said. “If you can draw your own conclusions, that’s fine, but I don’t think that it matters. I wrote that book as a sort of atmosphere of a place, and it was like dropping a stone into the water.”¹

As for Hanging Rock, it’s a real geologic formation in Australia. According to Wikipedia, “Hanging Rock contains numerous distinctive rock formations, including the ‘Hanging Rock’ itself (a boulder suspended between other boulders…) The highest point on Hanging Rock is…105 metres above the plain below.”²

You may think a film like this isn’t your cup of tea, but we hope you’ll give it a go. It’s a well-crafted study of the unknowable that will haunt you for some time. 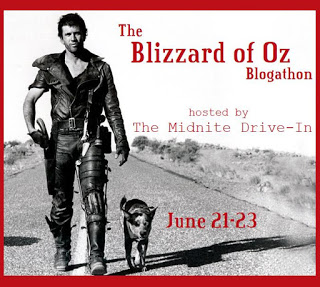 36 Comment on “A Victorian Picnic and Not Knowing What Happened”