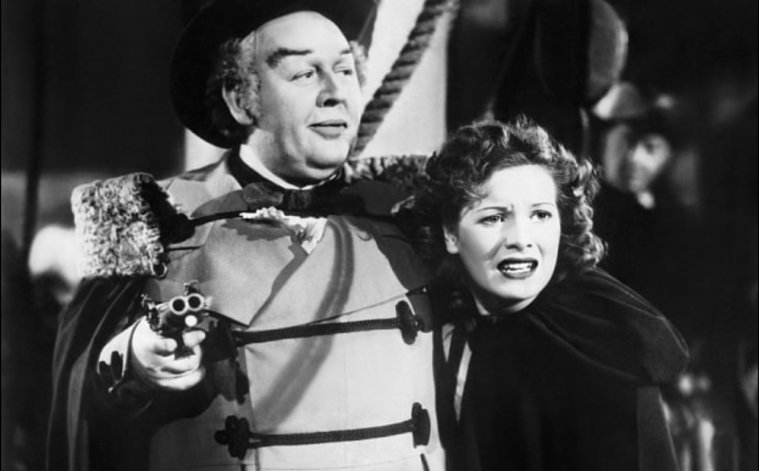 Have you ever worked on a project that didn’t Pan Out?

Perhaps there were politics or other constraints that prevented you from doing what might have been Best for the project.

Well, nobody has a flawless record. Look at Alfred Hitchcock. His last pre-WWII, Made-In-England film, Jamaica Inn (1939), would prove to be one of his career disappointments. “Although it became a box-office hit, I’m still unhappy over it,” he said in a 1962 interview.¹

The film is, in our opinion, a bit of a Mess. It’s patchy and feels too long, even at 98 minutes.

Also: You have to squint hard to see Hitchcock’s fingerprints. He doesn’t even make his signature cameo appearance.

“By the time filming began,” writes Hitchcock biographer Patrick McGilligan, “Hitchcock felt he was in the clutches of a two-headed monster. It would be too strong to say he ceased to care, but he knew a futile struggle when he saw one, and he stepped back and let [producer] Erich Pommer and [star] Charles Laughton dominate.”²

It helps to not have High Expectations of this film going in. Yet, it’s still a testament to the power of a gripping story – in this case, the 1936 novel by Daphne du Maurier.

Jamaica Inn is ghastly business. When a young woman (Maureen O’Hara) travels to Cornwall to live with her aunt, she discovers her uncle is the 1820’s version of a mobster.

Her uncle (Leslie Banks) and aunt (Marie Ney) operate an inn with shady characters Lurking About – specifically, a gang who cause shipwrecks for pillaging purposes. It’s organized crime, really, because Loot is counted and catalogued once it’s brought ashore. This is to ensure the thieves aren’t, you know, stealing.

If a thief is suspected of such, he is immediately strung up, and Let that be a Lesson to the Rest Of You.

Early in the film, we find Charles Laughton’s character to be suspect. He drops names, spends lavishly, and oozes slimy charm. Laughton, who, in this role, sports the strangest eyebrows on film, Chews The Scenery as best he can, and it is fabulous.

There is dark humour here and a few Hitchcockian trademarks, such as the suspicious woman (O’Hara) who ain’t easily bullied. In one scene, she hides in a cave with a fugitive thief (Robert Newton), and she has plenty o’ sass for any situation, fraught with Peril or no.

Newton: Trust me to land myself with a woman. On the other hand, of course, you did save my life.
O’Hara: I hope you make better use of it in the future.
Newton: That’s a tall order for a disparate character like me.
O’Hara: No doubt.

See that nerve? She doesn’t Skip A Beat.

A scene like that makes us a little melancholy, because it suggests this film could have been one of Hitchcock’s greats.

Novelist Daphne du Maurier was 29 years old when she wrote Jamaica Inn, inspired, apparently, by a vacation at the actual inn. When the novel was released, she was married with a young child; however, she was not someone who squeezed in writing between jobs to feed her family. She came from Money.

According to her official website, “For a long time Daphne du Maurier was described as a romantic novelist. This is completely misleading as she wrote dark, often gothic and edgy novels and short stories, with unexpected twists or suspenseful endings.”³

She had been labelled reclusive, but there are many stories of her generosity. For example, British author Julie Myerson describes her own experience:

Back in 1974, I wrote Daphne a fan letter… Amazingly, she replied. Her address was printed on the reverse of the envelope, so how could I not write straight back? We corresponded for a couple of years, and that changed my life, making a Nottingham schoolgirl’s idea of growing up to be an author seem an actual possibility, rather than just a dream.4