When Movies Outlast Their Expiry Dates

Women in the army. Image: TMDB

One criticism about old movies is they don’t age well.

Such is the case, in our opinion, with Never Wave at a WAC* (1953). Rosalind Russell stars as a wealthy, air-kissing D.C. socialite who decides to join the Women’s Air Corps (WAC) on a whim.

Russell’s character believes she can score some kind of highfalutin commission, e.g. a generalship, then fly to Paris to join her boyfriend, courtesy of the American government. This is the stratosphere in which she lives; the president (of the United States) is one of her chums.

Incredibly, despite her custom-designed uniforms, the army doesn’t share her Vision, and they designate her a lowly private. Even so, she slogs her way through this Humiliation and realizes the universe doesn’t revolve around herself.

Russell is a woman drawn to powerful males, but in Basic Training she begins to see the strength and resiliency in her fellow recruits and commanding officers – qualities she also discovers in herself.

Alas, we’ve told you only half the story. 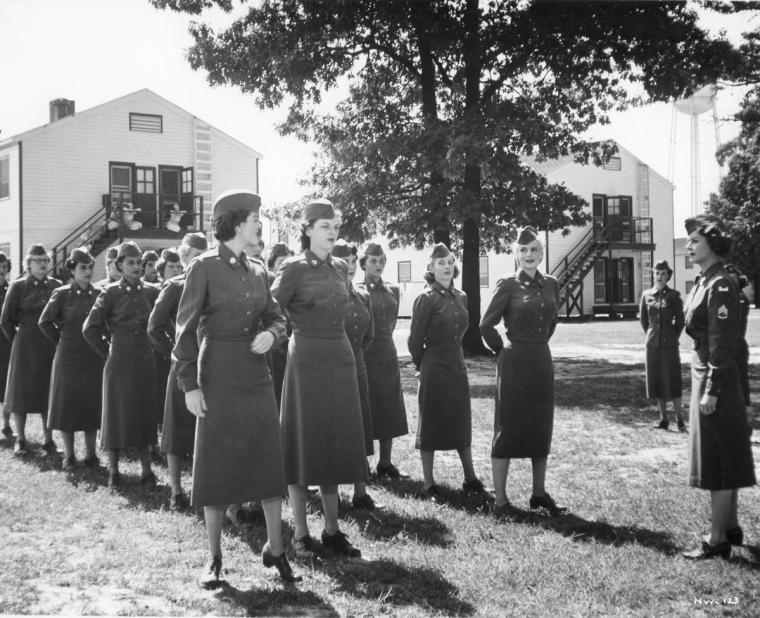 One of Russell’s new friends is a former, um, “model” (Marie Wilson), an attractive, but not intellectually gifted, woman. However, Wilson is kind, loyal, and determined. In fact, she joined the army to “get away from men” and be taken seriously.

But the men in the film refuse to let her do that, and one male recruit discovers her previous occupation and blackmails her into dating him.

It seems there’s never an opportunity when Wilson’s appearance isn’t remarked upon by male cast members, and this sends mixed signals. Did the studio want to celebrate military women, or make fun of them?

Here’s what we mean: 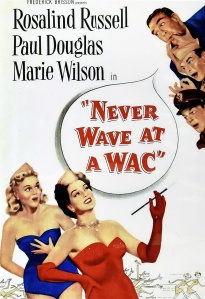 The Russell-Douglas divorce was especially acrimonious, and now Douglas intends to (A) make Russell’s life miserable, while (B) teaching her a Lesson. This is meant to be funny, and Douglas’s character derives a lot of mean-spirited pleasure from it.

You already know where this is going. Spoiler! Douglas realizes he’s pushed Russell too far, and she realizes she still loves him. So all is Worth It in the end.

Just that it’s painful, sometimes. In a film with witty lines and the fab Russell playing a larger-than-life character, it’s too bad the audience is saddled with cringing male-female interactions, even by 1950s’ standards.

The New York Times, trying a little too hard to be clever, said, “Life in the Army in these parlous times could be grim, but Rosalind Russell and a covey of cuties, to say nothing of a small posse of pursuing males, are fairly successful in proving that WACS can be wacky in ‘Never Wave at a WAC,’ which bounced into the Astor yesterday.”¹

And yet. Filmmakers never treat the corps itself with disrespect, even though Russell and Wilson seem like the most unlikely recruits of this or any other army.

Never Wave at a WAC was co-produced by Russell and her husband, Frederick Brisson. According to IMDb, Russell first produced this story on CBS television before investing in a feature film.

While this movie has its faults, stories focussing on women in the army weren’t (and still aren’t) overrun by filmmakers, although this film was remade in 1980 as Private Benjamin, starring Goldie Hawn.

Now, maybe you’ve seen Never Wave at a WAC and think we’re being too picky. Maybe we are. There are some very funny scenes here, as well as a refreshingly good portrayal of female friendship.

We hope we haven’t discouraged you from seeing this film, and if you do see it, we hope you enjoy.

*The title Never Wave at a WAC is a wordplay on WAVES (Women Accepted for Volunteer Emergency Service) of the U.S. naval reserve and WAC (Women’s Air Corps).
¹The New York Times. (Retrieved April 23, 2020.) Never Wave at a WAC’ at Astor by A.W.