The Misery of Getting What You Ask For Once, during our travels, we met a family returning from Ireland. We asked about their trip, and the mother gave an unexpected response.

“Our hotel had the strangest way of laundering underwear,” she said. “It was like they dry cleaned it. They pinned it on coat hangers and hung it in our room in plastic bags.”

It’s an unusual appraisal of a nation, but it just goes to show everyone sees things in their own way, especially while travelling.

We ourselves have our own peculiar bent. Once, when we returned from overseas, one of the first things we said was, “They have bizarre meat,” as though we were the Authority on what is and isn’t Proper Meat.

Many folks travel to Expand Their Horizons, but there are those of us who get in the way of our own experiences.

This is something Alfred Hitchcock touches upon in the 1932 comedy-drama, Rich and Strange (a.k.a. East of Shanghai). Rich and Strange is the story of a young married couple (Henry Kendall and Joan Barry) who are In Love but are Very Poor and long to be Rich. Happily, they receive an unexpected monetary windfall, so they buy fabulous clothes and go travelling.

However, they eventually realize a life of hedonism is not for them and – spoiler! – when the money runs out, they gladly return to their former life.

But, while they are flush, the couple visit exotic places, e.g. Paris nightclubs, the Mediterranean Sea, and the Suez Canal.

Travel is easy for these people. They’re chauffeured and nourished and itinerary-ed. There’s no struggling with foreign languages, no difficulty in exchanging currencies, no getting utterly lost.

Alas, without these usual rigours, our couple begin to fall out of love with each other, and in love with fellow travellers, because why not? It’s a Big World out there, filled with beautiful, glamorous people; why should anyone be stuck with ol’ what’s ‘er name? (Although, in the case of Kendall’s character, it’s hard to see what, exactly, women find appealing.)

Rich and Strange is not a film that inspires you to book your next vacation with a tour group. You get the sense travel is wasted on these characters, because marital alienation can, frankly, occur anywhere. We (yours truly) believe if a film takes us to exotic locations, then we’d better get plenty o’ Adventure and Thrills.

This is not that film. But we do have a portrait of a marriage between a dissatisfied man and Let’s-Get-Through-This woman who discover what is most Important to them. No money, no friends. Image: IMDb

Rich and Strange is film from the early years of the Sound Era, so it’s best to be prepared for that going in. It’s also somewhat experimental; you can see Hitchcock exploring camera angles that would later become part of his signature style.

The film feels like a rough cut, with short and choppy scenes, but it’s not without charm or wit. For example, at the beginning of the film, Kendall’s rich uncle sends him a telegram offering an immediate inheritance: “You might as well have the money now instead of waiting until I die.”

But there is one cringing scene where Kendall’s character calls Chinese people “dummies” because they don’t speak English, which is Quite Something considering the couple are guests on a Chinese ship.

The title of the film is taken from Shakespeare’s The Tempest, “Doth suffer a sea-change/Into something rich and strange.” You’re likely more familiar with Shakespeare-isms than we are, and we take it to mean a change in one’s worldview, which the main characters experience in a way neither they – nor we – expected.

Should you watch Rich and Strange? If you are an Alfred Hitchcock completist, then yes, absolutely. But keep in mind this is an early work, a signpost in Alfred Hitchcock’s lengthy and impressive career.

This post is part of the The 7th ANNUAL RULE, BRITANNIA Blogathon, hosted by A Shroud of Thoughts. 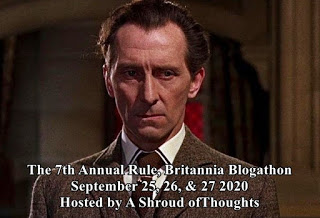 27 Comment on “The Misery of Getting What You Ask For”