This post is part of the William Wyler Blogathon hosted by The Movie Projector, which runs June 24-29. You won’t want to miss it! 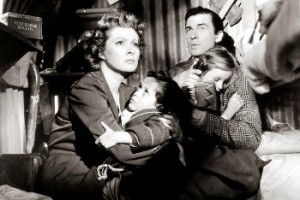 Greer Garson and Walter Pidgeon as the Minivers during The Blitz.

Yes, Dear Reader, we can tell you’re in the mood for a Movie Of Influence; a film that may have Changed The Course Of History.

You think we’re pulling your leg? No! We would never joke about such a movie as this. Look:

You could argue that it was one of the most influential films during the second world war. Even Hollywood thought so; this movie received six Academy Awards, including Best Picture.

The 1942 war film Mrs. Miniver, starring Greer Garson and Walter Pidgeon chronicles the life of a middle-class British family during the early days of WWII. The movie is based on a series of London newspaper columns by Jan Struther, which later became a book, then a Hollywood movie.

Wyler is still regarded as one of the best directors Hollywood ever produced, and Mrs. Miniver is one example why. The film opens with the Minivers living a bucolic life in a quaint village in southern England. In the opening scenes we see Garson as Mrs. Miniver, buying a silly hat and then fretting about catching her train. Wyler uses scenes like this to impress upon us that the Minivers’ pre-war life is lovely and sweet, hardly touched by the cruelties of life.

But it’s a set-up, all this cheery complacency. As the audience, we feel a little uneasy because we know that trouble’s brewin’ across the Channel.

With this movie, Wyler tells us to be patriotic and to rally around the cause. He tells us that to overcome great evil, one must make great sacrifice. And he warns us – without expressly saying so – that the Minivers will have to make such a sacrifice. (We dare not reveal any more of the plot for fear of giving away the shocking twist in the story.)

Greer Garson is almost a bit too glamourous for the role of an English housewife, but she still manages to be believable. Walter Pidgeon (with an American accent that is never explained) gives a charming performance as a man who greatly admires his wife. Clearly, this is Garson’s movie and Pidgeon seems comfortable with his role as “the husband”.

Mrs. Miniver reminds us that ordinary people who overcome extraordinary circumstances are society’s heroes. During war, it is not always the generals or the admirals who win the battles. Wyler shows us that heroes are people with the courage and strength to grind through the tough business. They are the ones to be praised.