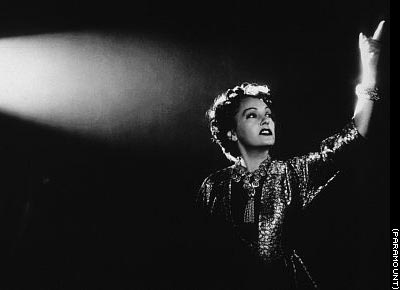 Nora Desmond worships herself on the screen.

Sometimes we (as in, yours truly) think we’re pretty smart. We think that if we’ve seen a movie a dozen times we know the movie. Ask us a question! We’ll give you the answer; we know it all!

We were reminded of this recently when we saw the 1950 film noir Sunset Boulevard in an actual movie theatre.

Now, we’ve probably seen Sunset Boulevard on our television a dozen times. We own the DVD. We force our everyone we know to watch it. We can quote entire scenes by heart.

But when we saw it on the big screen we realized we didn’t know it at all. Seeing it in the theatre changed the movie for us.

If you’re not familiar with Sunset Boulevard, it is the story of a struggling screenwriter (William Holden) whose car breaks down outside the cavernous home of a mentally-unstable recluse (Gloria Swanson). Turns out this recluse is Norma Desmond, who had been one of the most popular movie stars in the world during the silent era.

The movie is a series of flashbacks that describe the events leading to a murder. It’s also the story of old Hollywood and offers an interesting look inside the workings of a major Hollywood studio, in this case, Paramount Pictures.

We thought we knew Sunset Boulevard. We were familiar with the script and the sequence of events. But, as it turns out, we’d only ever seen half the film. Because, on the big screen, the movie is stuffed inside Norma Desmond’s house.

Instead of fitting the story comfortably on our television screen, we are pulled entirely into the movie, into Norma Desmond’s enormous gothic house with the heavy, funereal decor. The house becomes more than a set; it is a looming, silent master with knowledge it will not share. We are no longer an audience in a theatre; we are prisoners in this house.

The actors are its prisoners, too; captured by the world Norma Desmond has unwittingly created for herself. We respect Norma’s silent film career; we are weary of her narcissism. We admire her determination; we are annoyed by her neediness. We love Norma. We hate Norma.

Her descent into madness is magnified on the big screen, in this house that is both a tribute to madness and a betrayal of it. The final scene of the movie is utterly brilliant and completely devastating. The words, “All right, Mr. DeMille, I’m ready for my close-up,” twist inside of us. We do not laugh at this now-flippant phrase; we nearly weep because it signals finality. There is no turning back from here.

When the movie concludes, we do not stir. We have seen what madness looks like and it leaves us unsettled. When we finally leave the theatre, we squint in the bright sunlight but the images of the movie remain to haunt us.

Interesting background info on Sunset Boulevard can be found at the Wikipedia article here.