When Barbara Stanwyck Makes All the Decisions

They say you should never make a decision when you’re angry or tired or hungry.

Trouble is, people make decisions all the time under these conditions, which may be why the world is in the Mess it’s in.

We were musing about decisions after watching the holiday comedy, Remember the Night (1940), starring Barbara Stanwyck and Fred MacMurray.

Stanwyck stars as thief who acts as though she wants to be caught, i.e. she robs a jewellery store then immediately tries to unload the mechandise at a pawn shop without waiting for the goods to cool off.

MacMurray, on the other hand, works for the District Attorney, and he’s been ordered to prosecute Stanwyck. He’s greatly annoyed because this means he must delay his trip to his mother’s Indiana farm where he always spends the holidays.

Now, don’t get the idea MacMurray is a saintly character, because he’s not. He’s a ruthless prosecutor who forces a recess in the case because he thinks the jury won’t convinct a woman just before Christmas.

However, MacMurray does have a heart, and he posts bail for Stanwyck so she won’t have to spend the holidays in the clink. The bondsman, though, likes to have insurance, so he deposits Stanwyck in MacMurray’s care until court resumes in January.

You’ve already guessed this is a film driven by characters’ decision-making. But here it’s the women who decide How Things Are Going To Be. 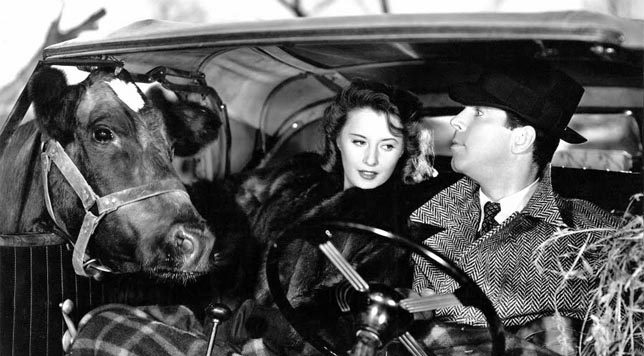 In particular, it’s Stanwyck’s choices that propel the movie, starting with her decision to rob the jewellery store. The outcome of Everything depends on her acceptance or refusal and, early in the film, we see why she Lives Life as she does.

Here’s the plan: MacMurray will drive Stanwyck to her childhood home – en route to his mother’s farm – then retrieve her after the holidays. Stanwyck is, at first, excited to see her mother after an absence of many years, but she becomes increasingly nervous the closer she gets and, when she arrives, we see her fears have been realized.

Stanwyck’s mother (Georgia Caine) is arguably one of the meanest mothers in classic film. There is no joy, no hint of affection in her cold stare.

When MacMurray indicates she ought to be glad to see her daughter, she snarls, “Glad? Why should I be glad? Good riddance to bad rubbish, I said the day she left.” Then, “Just like her father, she is. Always laughing at serious things, she was. Never doing what she was told till she winds up stealing, as I always said she would.”

Caine can’t be held entirely Responsible for Stanwyck’s criminal bent, of course, but she does show us the results of clinging to bitterness.

Charity is one thing, but family is another. Image: Pinterest

We see a very different person in MacMurray’s mother (Beulah Bondi), another woman who hasn’t shied away from the Tough Decisions in life. But this hasn’t hardened her; in fact, it’s had the opposite effect.

When Stanwyck arrives, unannounced, at the family farm, Bondi doesn’t blink, doesn’t hide the silverware, even though she knows Stanwyck’s Situation.

But when she sees her son falling in love, she moves to secure her investment, and she does so in the gentlest of ways. She explains to Stanwyck that, as a mother, she has a Vested Interest in MacMurray’s future. He’s worked hard to be where he is – and by this we know she means she’s worked hard.

Stanwyck ain’t no dummy and she must Decide: Will she run away again and bring MacMurray with her? Or will she return to New York to Face Justice?

How do you spell c-h-e-m-i-s-t-r-y? Image: Haphazard Stuff

Remember the Night was written by Preston Sturges, the creator of some of the most successful and influential Hollywood comedies of the late 1930s and early 1940s.

Also, notably, this was to be the last of his scripts directed by someone else. Sturges was unhappy with director Mitchell Leisen’s treatment of his screenplay, and from here on, Sturges would direct his own scripts. The following year, for example, he would direct Stanwyck in 1941’s The Lady Eve.

We (yours truly) must respectfully disagree with Sturges’s assessment of Leisen’s direction of this film. Sturges provides sparkling dialogue, but Leisen makes this a romantic, almost moving film, which we appreciate given the characters’ circumstances.

If you haven’t yet seen Remember the Night, we implore you to do so. It might become a new holiday tradition.

This post is part of The HAPPY HOLIDAYS Blogathon, hosted by the Pure Entertainment Preservation Society.

48 Comment on “When Barbara Stanwyck Makes All the Decisions”