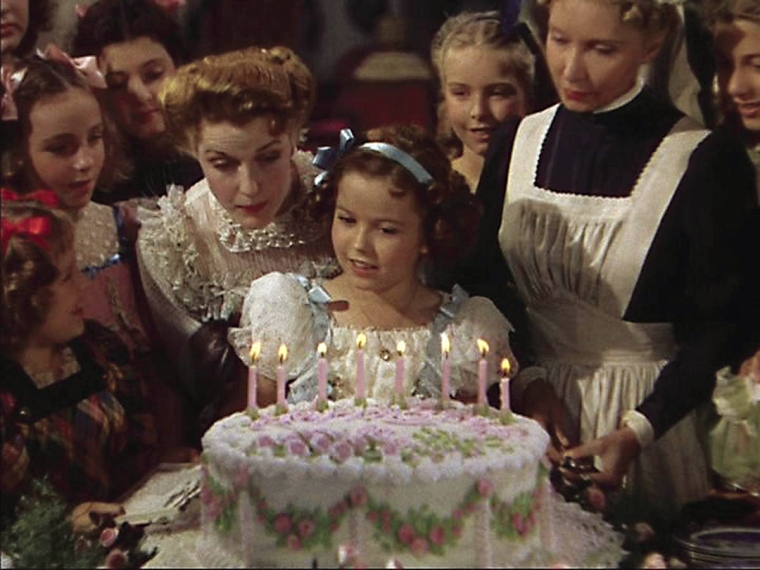 Every day is a party in Shirley’s world. Image: The Gazette

In 1939, Shirley Temple was 11 years old and Past Her Prime as a box office sensation.

She had been in the movies since the age of three and, from 1935 until 1938, there was almost no greater bit of movie business than Shirley Temple. In 1938 she was voted #1 box office actress; in 1939 she would slide to #5 – due, in part, to her making fewer movies that year.

But in 1939, before it was evident her best movie-making days were Over, Shirley starred in The Little Princess, based on the novel by Frances Hodgson Burnett. This film had a lavish $1.5M budget – her most expensive film to date – and it was her first feature in Technicolor.

The Little Princess is the story of a rich girl sent to a London boarding school while her father goes to battle in the Second Boer War. Life in the school is, at first, pleasant, with parties, swirly dresses, and a pony (!). However, it’s obvious the shifty headmistress prefers Shirley’s money to her company.

Shirley’s character is generous and unspoiled, as per usual, and she makes friends with people who are Kind and Decent, e.g. the school’s scullery maid and the butler who lives next door.

Alas! On Shirley’s birthday, on that very day, comes news of her father’s demise in the war. Not only is Shirley an orphan, it also appears she’s Flat Broke. Turns out her father was bankrupt, and her extravagant lifestyle has left her indebted to the school.

The headmistress seizes Shirley’s possessions in order to recoup some of this debt, and Shirley herself is forced to work as a servant to her former classmates, wearing the one dress that has been donated to her. 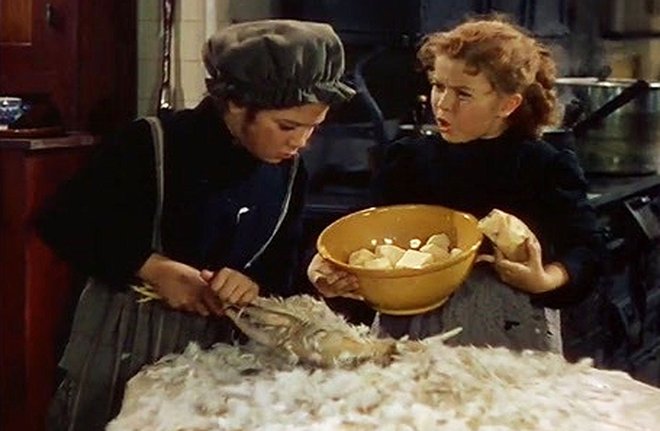 Shirley Temple movies have common themes, including a sharply-divided world where those who admire her are Good, and those who don’t are Bad.

There’s usually an absent mother and/or parents, a young couple-in-love who become surrogate guardians, and an older man with whom she can dance. In her films, Shirley is the star and adults are the accessories.

Her movies are sometimes criticized for being unrealistic and gooey, but we don’t think The Little Princess is sickly sweet. In fact, there are some dark undercurrents here.

First, the loss of a beloved father so early in life would be almost unimaginable. Shirley’s character refuses to believe he’s dead, however, and she recites a little poem as a prayer:

My daddy has to go away
But he’ll return most any day.
Any moment I may see
My daddy coming back to me.

It’s heartbreaking to see Shirley in real tears, standing at the window, reciting her pitiful poem, watching the street for a man who isn’t coming.

Second, the war casts a long shadow over the film. One scene shows a publicly-posted casualty list, and a woman collapses and screams “My boy!” after reading the names.

Third, Shirley visits a nearby hospital to search for her father. She meets war veterans who are severely injured, and one who is mentally unstable.

Lastly, Shirley is in conflict with authority (read: headmistress) to whom nothing is more frustrating than a recalcitrant child. When the headmistress raises her hand to slap Shirley, the girl glares at her, daring her to do it.

Shirley’s resolve condemns her, but it also saves her. If she’s going to Live Through This, she must rely on her defiant nature.

The Little Princess is set in 1899, and the studio’s props and wardrobe departments were careful to achieve historical accuracy. For example, says Wikipedia, “Production was held up after it was discovered that one of the costumes Temple wore used snap fasteners that were not invented until 1908.”

This film was a box office success – the second-to-last success Shirley would have as a major star – although some critics at the time labelled it “saccharine” and “hokum”.

Shirley Temple is still winsome here, but no longer the cute lil’ tyke she once was. However, The Little Princess is in good hands. Shirley easily carries the film, and she’s always worth watching.

The Little Princess is streaming at The Film Detective in December.